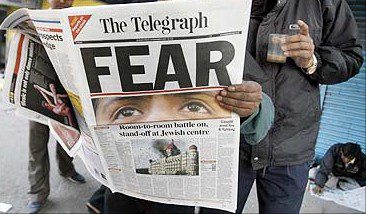 Milan, a passer-by calls the police after noticing an abandoned shopping bag on top of a parked car. The bag contains nothing but a few cans of beer.

Another example. Milan, a forgotten bag left on the subway raises fear in a woman who immediately phones the underground security. On the arrival of the police, neither the bag nor the owner of the bag were found.

A third example. One of the most distinguished Italian national newspapers reported that someone has found a bomb in the centre of the city of Milan. But also here neither the bomb nor the person who called the police were found.

All of this is obsessive fear of terroristic attacks. But isn’t the mass-media the real reason of these fears? What if newspaper and television news directors, together with their publishers, were to be reported for their scaremongering?

Alarmism, in a moment of tension such as the one following the attacks in Paris, is the most damaging thing someone can intentionally create. And all of it to push business, print more copies and increase the number of readers, deeply twisting the meaning of what news is supposed to be. This is how journalism turns into a competition for who screams the loudest, emphatic, alarming headlines, obviously followed by the most terrible photos.

Do you still believe this is true freedom of the press? Do you really think that behind every apparently abandoned package or any unattended bag there’s a hidden terroristic threat? Who will pay the price of this will always be us through the National Health Service to heal our states of anxiety and depression, which this constant fear inevitably creates. According to EURODAP (European Association for Illnesses caused by Panic Attacks), the mass media is the main cause of anxiety. This is not surprising.

Not long ago all the major newspapers had headlines on their front pages announcing stoppage of all public transport in Rome and Milan, because of false reporting of apparently abandoned bags. Everyone in Italy had to read about this. Everybody from Sicily to South Tyrol was informed about these false alarms. What is the reason for these articles? Why should people living in Messina have to know about false alarms happening in Milan or Rome? (And we underline: FALSE!). The answer is one: it is useless.

The same goes for many cases of crime news, especially murders or kidnappings, in particular, if they deal with young victims. Let’s take cases such as the Yara Gambirasio murder, or the slaughter in the neighbourhood of Erba as examples. What do the readers have to gain?

Translated by A.J.L and revised by M.K.